The basic concept of Linex Boat Oy, which has been sertified with to the highest ISO 9001-2015 standards, is traditional coastal Ostrobothnian quality combined with modern production.oriented thinking. Since starting to build wooden fishing and working boats in the 1920`s the Lindkvist family has delivered more than 3,000 recreational and commerscial vessels. The actual Nord Star model range, consisting of 24 - 49 foot boats, meet the stringent CE class B of Offshore seaworthiness. Today fourth generation boat builder Simon Lindkvist has joined the company and is designing boats along with his father Olli Lindkvist, CEO of Linex-Boat Oy.

The practical and wide walk-around decks are already a known concept for Nord Star boats. NS49 SCY has 3 sleeping cabins on lower deck. The Master cabin placed in the middle of the boat is approximately 12 m² and has its own head. In front is the guest cabin and in the aft is the third cabin that can be built according to the needs of the buyer. The galley is placed on upper deck with large doors opening towards aft deck. The 3 large sliding doors provide effortless moving around. On cockpit there is a large U-sofa and on foredeck a sunbed. The fly bridge can also be adjusted and built according to the buyer’s needs. 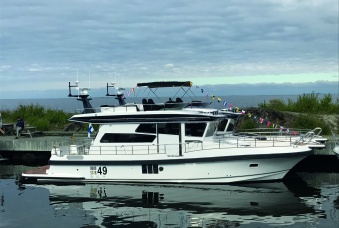 With its magnificent hand laminated sturdy hull the NS 42 is a true all weather boat with emphasis on living comfort and great seagoing qualities. Three sliding doors and walk around decks add both comfort and functionality to the beautiful design. Luxurious comfort through well sized cabins, a modern galley and double bathrooms invites for an active boating life. Living comfort is enhanced by a big glass sunroof in the saloon. This flagship from Linex-Boat Oy is truly the optimal choice for offshore voyages. 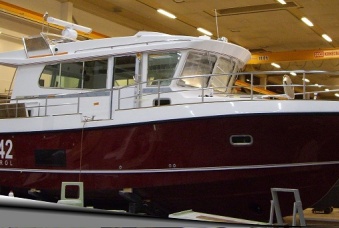 The NS36 is a sporty luxury boat with outstanding living comfort, which makes it an excellent choice for long offshore journeys. The boat has all the features the Nord Star brand is known for: seaworthiness, reliability and practical living on board. Spacious walk-around decks are already a concept for the Nord Star boats and makes for easy, safe and carefree maneuvering from stern to bow. The boat represents the same high quality as our other boats in terms of it´s prestige appearance and basic solution.The luxurious atmosphere is pronounced in all indoor spaces. The boat has two separate sleeping cabins, a spacious saloon, a well sized pentry and separate toilet and shower facilities. Living comfort is enhanced by a big glass sunroof in the saloon. The long stern overhang provides protection for the versatile large aft deck. 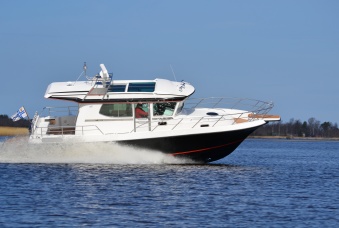 The Nord Star 32 Patrol is the newest model in the Nord Star range, launched in April 2015. The development of this model took 2 years and the focus has been on comfort and seaworthiness. The NS32 has rough design combined with luxurious interior. It is equipped with two sleeping cabins, a large galley, toilet and a spacious wheelhouse. 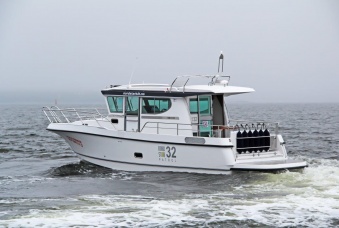 The keys to success of the all new Nord Star 31+ Patrol in its own class are spacious, well-equipped living spaces and excellent offshore properties. The walkaround deck with three doors ensures that walking on the deck is always safe and hassle-free. The cabins are designed for a mature taste: in front it has a convertible bed for two, the center cabin offers sleeping space for up to three persons. A large toilet and a luxurious salon offers extra comfort for excursions, not to mention the galley. 31+ Patrol's hand-laminated, strong hull gives it even more strength and confidence to shear through breakers with confidence, making it an excellent boat for light work or excursions to archipelago. 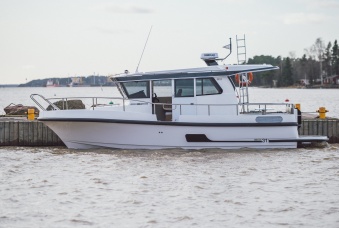 The Nord Star 28 Patrol is designed for folks wanting to cruise in a wide range of sea and weather conditions. The Offshore-worthy hull, rugged construction and the wide walk-around decks provide seaworthiness, speed and comfort. The Nordic heritage and the distinct features of the Nord Star model range are very visible in the NS28 as well. The boat can be equipped with either inboard or outboard engines. 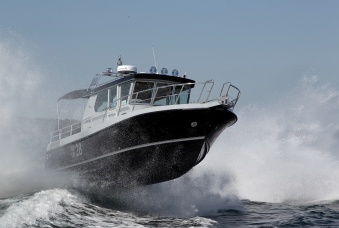 The Nord Star 26 patrol was introduced in 2006 and upgraded with an optional aft cabin in 2013. It´s a true all weather and all purpose boat. With the optional aft cabin the NS26 easily sleeps 4 persons. A separate toilet and pentry features offers comfort and functionality under way. The NS26 features the same excellent seagoing qualities and craftsmanship that is associated with the whole Nord Star model range.
The Nord Star 26 Outboard can be equipped with one or two outboard engines. The manufacturer recommends 2 x Mercury 150hp EFI motors. With this package a top speed of 40 knots and great acceleration can be achieved. Fuel consumption stays at a moderate 1,9l/ nm at 30 knots cruising speed. The sense of security and the maneuverability are unbeatable. The former engine room provides generous storing space in the outboard model. 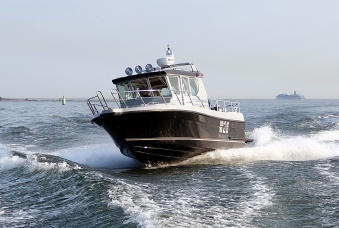